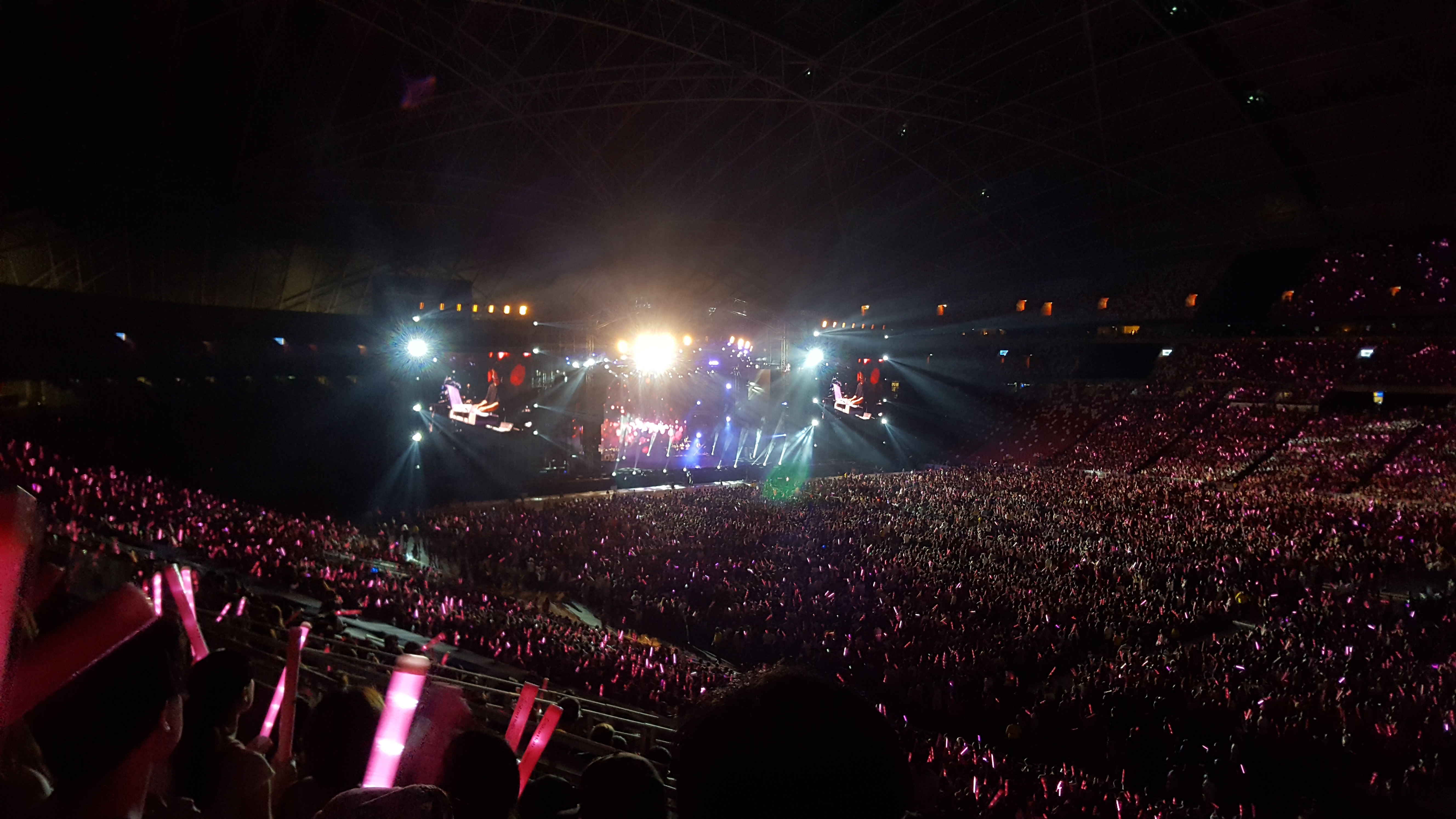 Years later, I’m working and have some disposable income to spare. So, when the opportunity came in March, I grabbed a pair of $158 tickets to his concert. $158 may seem expensive, but it was already only the second cheapest tier (excluding the restricted view seats). Based on the seating plan and my prior experience with concerts held at the Singapore Indoor Stadium, I thought I had pretty good seats.

Fast forward almost six months later and it’s concert day. One thing I didn’t foresee was the massiveness of the National Stadium vis-a-vis the Indoor Stadium. The premium, stage-level seats already spanned the length of one football field alone, so you could imagine how bad the seats on the stands were. I could barely see him in real person; they might as well have streamed it live to my PC instead.

But of course, a concert is all about the atmosphere. It was a full-house concert, and a really colour co-ordinated one at that, thanks to the lightsticks provided.

The concert began at approximately 8.40pm. The beginning scene was really elaborate, with pyrotechnics, and a cool visual scene that led to Jay Chou coming out from somewhere in space. The opening credits showed the producer and director, among others, which made me feel as though I was watching a huge blockbuster. It was going to be an amazing night, I thought.

Now, I have to admit that I stopped religiously listening to Jay Chou’s songs since about 2010. So I didn’t quite know what the first song or two were because they were from his later albums, but when he sang 她的睫毛 and 开不了口 I felt the adrenaline. The latter song was especially apt given the space theme (in the MV of the aforesaid song, he’s jetting around in a spaceship).

But just then, I realised something was different–he wasn’t singing like on his concert CDs, but rather stuck largely to the same tune as his album CDs.

The next few songs were either songs I didn’t know or songs I didn’t like. In between there were ‘special guests’ who were basically his proteges or those who were in his entourage for a long time. When the name “Gary” popped up on the projector screen I was excited for a split second when I thought 曹格 was here, but no, it was just Gary Yang from 南券妈妈. There was no Nathan Hartono or any local singers for that matter; instead we had this 16 year old kid whom I don’t even remember his name now.

Midway through the concert he started singing 屋顶. While it isn’t my favourite song by any means, I thought surely there would be a special guest for him to duet with, right? But no, instead we were supposed to be the ones singing the duet with him.

Another song I remember was 无双. That song has an outtro that goes really high. Instead of singing the outtro himself, he got his backup singer to do it for him.

Speaking of outsourced singing, Jay Chou seemed more like he was conducting a promotional tour for his entourage. Many of his songs were sang (in part or in full) by his ‘special guests’. I’m not sure if it’s age or a lack of practise–he just doesn’t seem to have the stamina any longer.

The piano segment near the end was by no doubt my favourite part of the concert. He sang classic songs everyone was familiar with, like 晴天 and 白色风车, among others. Still, it was lacklustre compared to those I’ve listened to on his concert CD. For 白色风车, he skipped the last chorus, which contained the highest parts of the song, entirely.

As expected, Jay had an encore segment, which was rather well thought out and lasted a good thirty minutes. But it was a huge letdown when it came to the fans.

How the encore segment worked was like this–he/ his entourage would randomly choose a fan, and the fan would choose a song to duet with him. For the first song, the camera panned towards a girl all the way in front, who was visibly shocked and at a loss for words. I (and probably everyone else in the stadium) felt genuinely happy for her as she slowly regained her composure. Jay asked her for a song… and she insisted on 屋顶. Yes, again. Even though he had subtly hinted to her to perhaps choose another song (like 珊瑚海, pretty please???). I don’t know if it’s just me, but I thought I heard a collective groan. All that goodwill towards her evaporated in an instant. To her credit, she did sing the song pretty well.

Then two other guys were chosen, one of whom was the president of the local Jay Chou fan club. As they bantered, Jay Chou subtly suggested to choose one of the songs that Devon Song wrote the lyrics for, and proceeded to name the three songs that he wrote: 枫, 搁浅 and 退后. I was excited now for those were my three favourite songs (and yes, I have so much newfound respect for Devon now). And then he proceeded to choose something completely different… He didn’t choose a bad song, but it was just a huge letdown after the anticipation.

Next, he chose another girl. And I was thinking, hoping, fervently praying that she would choose 珊瑚海. 我prease你啦， tolong tolong. But noooooo, she chose 前世情人, a song on his new album that was so unfamiliar that even Jay had to ask his team if they knew how to play it. She held her ground, which was fine… but… she didn’t even know how to sing the song.

Last but not least, he chose a guy, who so happened to have his birthday on that day itself. Of all things, he requested Jay to sing a birthday song for him.

Thankfully, Jay Chou salvaged the night by choosing the last song himself–a song he said that everyone would be familiar with, and perhaps that’s one of the only few things he did right (well, at least by my (high???) standards)–七里香. Which brought me back to 2004, a time where life was so much simpler, a time where I could insert a dollar coin into my school’s jukebox machine (do such machines even exist these days?) and have the exact same song blast out from its speakers, much to everyone’s satisfaction.

Perhaps Jay Chou is getting old, or perhaps he hasn’t dedicated himself to his music as much in the recent years, but my first Jay Chou concert experience was a letdown. Perhaps if I didn’t listen to his concert CDs to find out how well he can actually sing live, I would’ve been contented. But based on the number of songs that he sang that I didn’t even know existed, one thing’s for sure–I really, really wish I could turn back the clock to say, 2007 or 2008, and pomp down some good money for his concert back then. Which would also have been held in the Singapore Indoor Stadium, where the sound system does not actually suck.