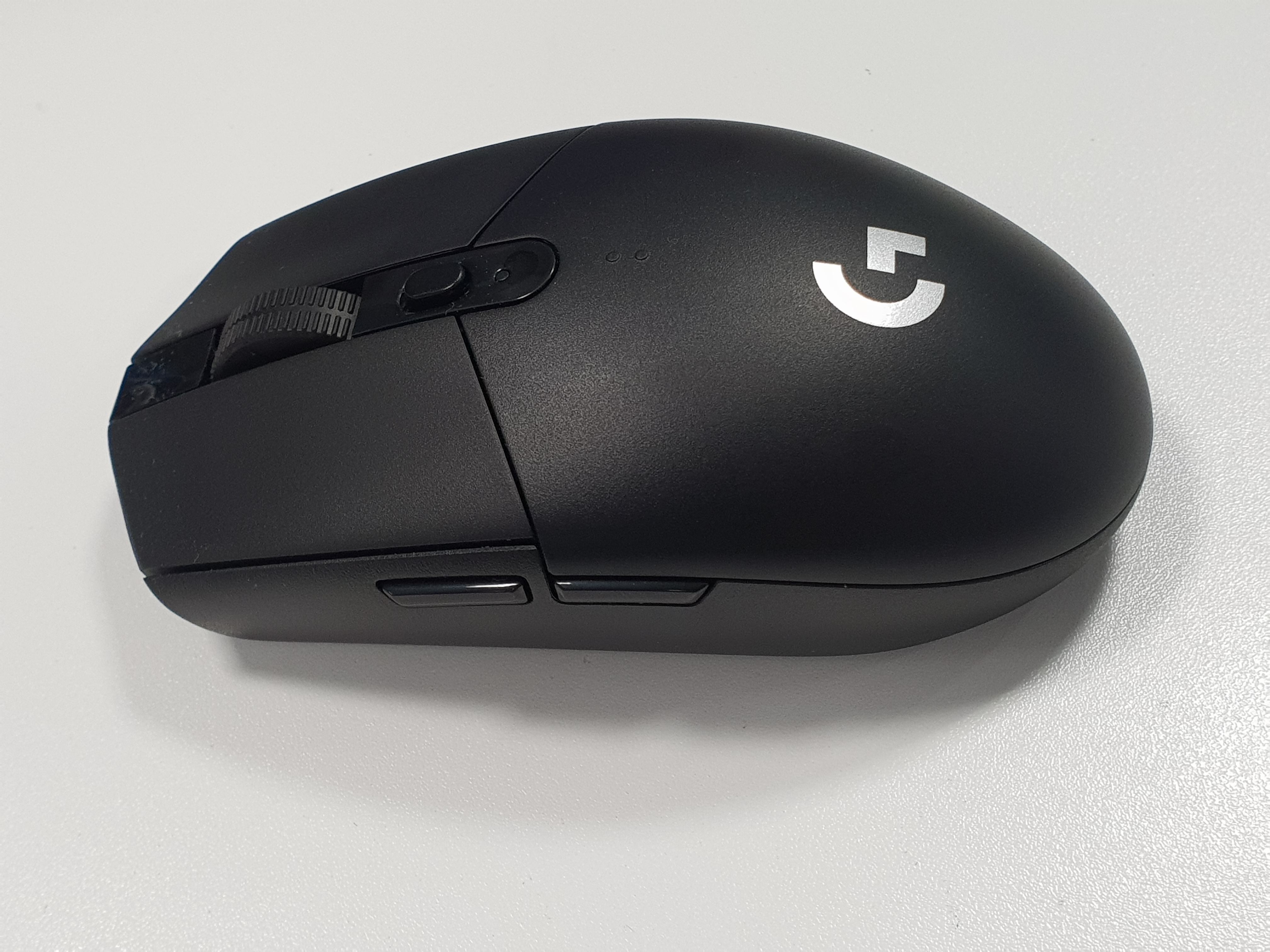 A gaming mouse as a productivity device? Normally, one wouldn’t think of a gaming mouse as being well suited for writing documents and sifting through page after page of Excel spreadsheets. After all, the gaudy RGB LEDs found on most gaming mice may look pretty out of place in an office environment.

The Logitech G304 (known as the G305 in some other markets–don’t ask me why) begs to differ. If not for the trademark “G” logo on the front, one would think that this device was a $5 mouse that came with the computer.

Why buy a gaming mouse only to have it locked up in the office? To be fair, I was chugging along just fine with the tiny Logitech m235. However, I had my work laptop swapped out recently with a new model with a Full HD display with higher pixel density. As the mouse now had more pixels to cover within the same distance, I had to turn up the mouse sensitivity settings to compensate. Beyond a certain point, it seemed as though I was pushing the 1,000 dpi sensor to its limit–my cursor movements became less precise with a noticeable jitter.

I did some research to see if there were any wireless productivity options out there with a better sensor. Unfortunately, most of Logitech’s and Microsoft’s range topped out at 1,000 dpi. I had to look towards the MX Master 2S or MX Anywhere 2S for a sensor upgrade.

With the 4,000 dpi sensor, both options were rather compelling. The MX Anywhere 2S had a dealbreaker, though–there was no middle-click built into the scroll wheel; instead you had to click the button below the wheel. Silly. Meanwhile, the MX Master 2S cost nearly S$150. Whew.

Then, while browsing at the local Challenger store, I browsed the gaming catalogue to see if there were further options. Most wireless options were meant to be temporarily wireless, with rechargeable batteries that lasted just twenty hours on each charge. Obviously, these would be too cumbersome for office use and would defeat the purpose of buying a wireless mouse in the first place.

That left me with three options to choose from–the G304, the G703 and the Razer Atheris. The Atheris was crossed out from my list because it offered only a 300-hour battery life on two AA batteries. There was no information available as to whether there was a power saving option available that could extend battery life for months. Changing batteries every 2 weeks or so was clearly unacceptable.

So that left me to choose between the G304 and the G603. Both ran on AA batteries, with low power modes that would enable the mouse to go the distance–for 9 or 18 months respectively. I chose the G304 because it was slightly cheaper and offered the same performance. Changing batteries every nine months seemed pretty reasonable to me–an AA battery powered my m235 for about that long, too.

The Logitech G304 isn’t cheap by any means, but is still relatively affordable for the performance it offers. It retails at an SRP of S$79, but can be found on Lazada or Qoo10 for about S$72, complete with local warranty. Click here to buy from Lazada or here to buy from Qoo10.

The mouse is powered by a single AA battery (included when you buy the mouse), cleverly nestled under the removable top cover. Next to the battery bay is where you will also find a slot to stow the USB receiver when not in use.

There is no decorative lighting on this mouse, save for a tiny LED below the button under the scroll wheel, which can be programmed to show you certain things, such as battery life and current mouse sensitivity.

The mouse weighs 99g with the included battery, which still feels acceptable in my hand. The mouse is almost symmetrical in shape, though the side buttons are found only on the left side. Ergonomic wise, I did not feel any discomfort despite using it for long hours every weekday.

All six buttons (including the one placed below the scroll wheel) on my copy of the mouse have a firm, tactile feel and you won’t end up pressing them accidentally unlike some Razer mice I’ve used in the past. The scroll wheel is clicky and there’s no option to change this setting to a ‘freewheeling’ one unlike some of Logitech’s higher end offerings. It does not scroll from side-to-side either.

The mouse is made of plastic and does not make use of a soft-touch coating unlike the Razer DeathAdder or some of other Logitech’s gaming mice. Given Singapore’s humid climate, oftentimes such soft-touch coatings wear down pretty quickly, so perhaps we’re better off without them. Nevertheless, the plastic used on the G304 is still nice and grippy to the touch.

The base of the mouse is pretty sparse, with five rubber feet, an on/off switch and the sensor in the middle. The sensor uses an infrared LED and therefore doesn’t light up (to the naked eye). I used the mouse on a white table without any mousepad and the mouse tracked just fine. Thanks to the mouse feet, there wasn’t any noticeable friction dragging the mouse across the table.

If you use other Logitech wireless peripherals, it is worth noting that the G304 uses the LIGHTSPEED and not the Unifying receiver. You cannot pair other devices to the same receiver. There is also no option for Bluetooth connectivity, making this mouse unsuitable for tablet use. On the other hand, the receiver is tiny enough that it is barely noticeable even on a laptop.

This is where the G304 pulls ahead of many competing office mice. While the G304 does not support Logitech Flow, which allows you to control multiple computers over the same network with a single mouse, it has on-board memory so you can store up to five profiles on the mouse itself.

What this means is that you can configure the mouse however you like. The actual configuration, however, requires you to install the Logitech Gaming Software. I have my mouse configured such that I can easily check the mouse’s battery life, switch between five self-configured DPI settings and to switch it to low-power mode. It is important to note that in the mouse’s default mode, it runs at 1000Hz polling rate, where battery life is rated at a measly 250 hours. When switched to the low-power mode, the polling rate is dropped to 125Hz but battery life is ostensibly extended to 9 months under normal usage.

Because the mouse has on-board memory, you do not require the software to be permanently installed. As it is difficult to get third-party software installed on my work computer, what I have done is to configure the mouse at home and then bring it to work.

The G304 is powered by Logitech’s in-house ‘HERO’ optical sensor, offering DPI speeds between 200 dpi and 12,000 dpi. The HERO sensor is apparently almost equivalent to the PixArt’s 3366, which is often regarded as the best sensor in the market.

In daily use, tracking works extremely well, with no mouse acceleration or filtering. In an office context, this means you can adjust the ruler in Microsoft Word extremely precisely. Despite running the mouse at the lower 125Hz polling rate, the mouse still tracks far better than my old m235. In daily use, I have my mouse sensitivity set at about 2,500 dpi, with the slider in Windows set to the middle setting (apparently, this is the only setting where the mouse runs naturally with no software interpolation), which is fast enough to navigate my laptop’s screen and the attached monitor.

While this mouse isn’t the king of productivity mice in that it doesn’t offer features such as side-scrolling or Logitech Flow (for that, look for the Logitech MX series), it is a well-rounded option for the price. With six configurable mouse buttons, an ergonomic and low-key design, an excellent sensor and the ability to customise the mouse the way you like it without needing software to be permanently installed, the G304 is a really compelling option for its price. For $79 or cheaper, the G304 is virtually unrivalled in this space if you require a wireless mouse that runs AA batteries for months at a time.