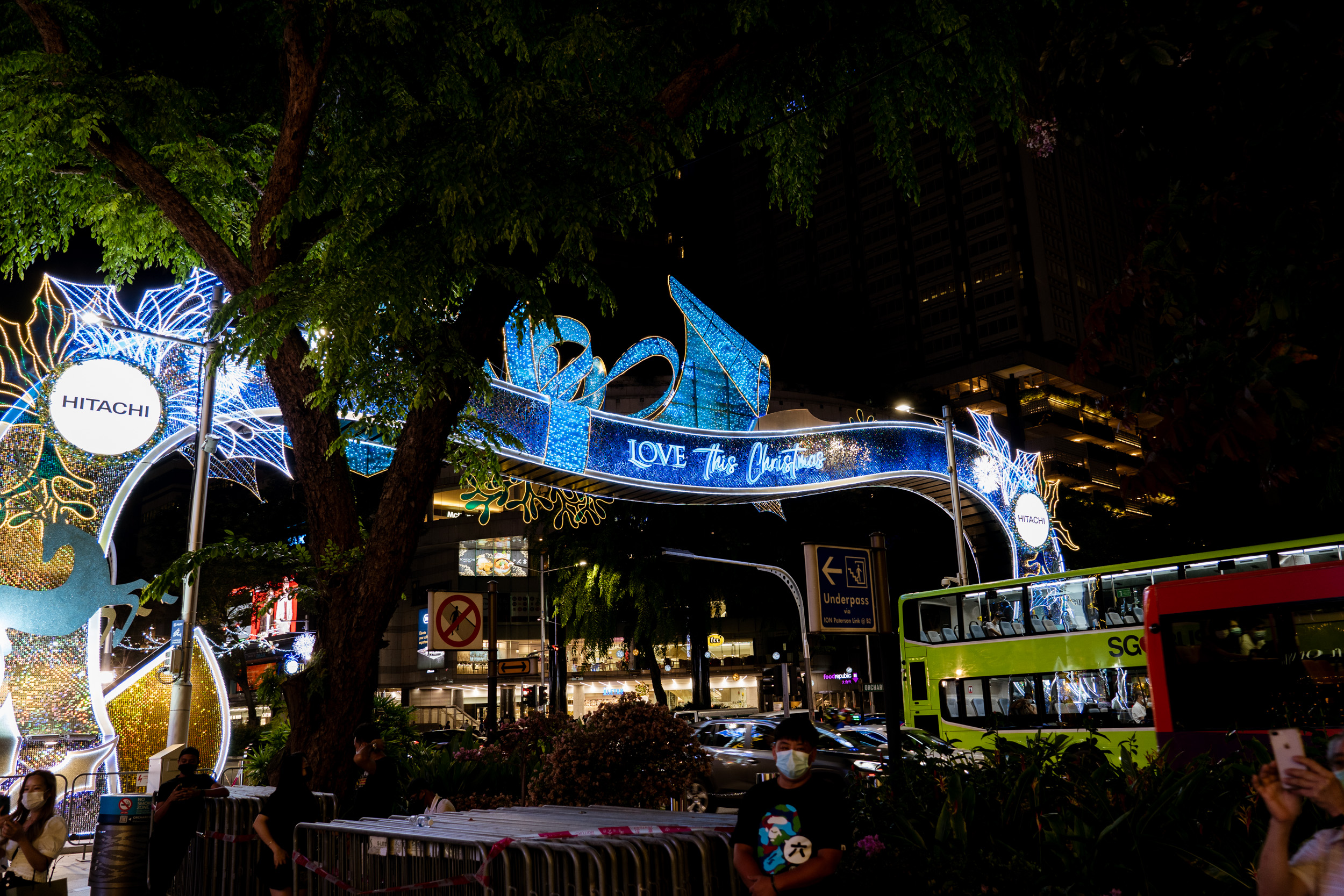 As it turns out, someone up there had other, more nefarious plans for us. Even as COVID-19 was declared a pandemic in March 2020, I never once thought that it would spillover to the rest of the year. And here we are, celebrating a Christmas where most of us are in Singapore–whether by choice or circumstance–with Christmas celebrations limited to a party of five (though, not for long, as Phase 3 kicked in a few days later on 28 December).

Many plans have been put on hold or cancelled this year; thankfully, the yearly Christmas light-up at Orchard Road has proceeded as per normal. In fact, I quite like this year’s decorations–the overhanging arches have made a comeback after a conspicious absence last year–and the Christmas tree-shaped lights adorning the Somerset stretch are a really nice touch.

Some say that the decorations are rather minimalistic this year (no reindeer, Disney characters, or Santa butts), but I beg to differ. The Christmas tree-shaped lights, for example, are about as intricate as you can get.

Despite the COVID-19 situation and the media which keeps proclaiming that Orchard Road is dead (or something along those lines, anyway…), Orchard Road was surprisingly crowded on Christmas night itself. I shot these photos at around 10pm at night on Christmas Day, where all the shops have just closed for the day and the incessant heavy rain had just stopped. Maybe with more locals stuck in Singapore during the Christmas period, Orchard Road is rowdier than usual. Or, perhaps it’s just that we locals are content to walk around Orchard Road and soak in the festivities without spending any money.

Apart from the crowd and the overhanging Christmas decorations, you can feel that Christmas is a little scaled down this year. Along the ION-Wisma-Taka belt, TANGS no longer has the LED light backdrop; instead, it’s just a signboard with spotlights shining. Wisma barely has any Christmas decorations at all apart from a pathetic looking Christmas tree. Over at Ngee Ann City, there’s no Christmas fair. Wheelock Place fares a little bit better, though there’s no longer the ‘tree-within-a-tree’ concept as with the prior year. One notable exception is Paragon–which has really elaborate lighting as usual.

Basking is prohibited this year, so the only form of entertainment along this stretch is… food. There were unusually long queues for kebabs and ice-cream on Christmas night itself.

Along the Somerset stretch, things are noticeably quieter. The lights are barely on at Mandarin Orchard, as it was ordered to suspend operations at the time due to possible cases of COVID-19 transmission (what I’m more curious about is actually the fact that there are still some lights on). Mandarin Gallery, as usual, has those gaudy red Christmas decorations which looks more appropriate for Chinese New Year. Robinsons, a mainstay along the Somerset stretch of Orchard Road for the past few decades (be it at The Heeren, Centrepoint or Specialists’ Shopping Centre previously), is now gone for good. Tsui Wah, which probably sub-leased its space from Robinsons, is also closed for now.

The Apple Store was closed by the time I visited it (around 10.04pm), though its prominent signboard continues shining. Over at Orchard Gateway, the decorations are very low effort this year, especially when you compare it to what they have done in the preceding years. Emerald Hill is a ghost town by 10pm–I guess no point opening bars till late when you cannot sell alcohol after 10.30pm.

Overall, the Somerset stretch stands in stark contrast compared to 2019. In 2019, we had the open-air carpark converted into an overpriced carnival. This year, due to COVID-19, there’s nothing at all.

Now that we’re busking in the new year and have put the nightmare of 2020 behind us, let’s hope that things turn out for the better in the coming year!