It’s once again, as Andy Williams would have put it, the most wonderful time of the year.

I closed off 2020’s Christmas post on a hopeful note:

Back then, things were looking up; we could go out in groups of eight, and the dreary days of working in the office five days a week loomed around the corner. Then, Delta came in, the hospital outbreak happened, there was an outbreak at the airport, and we reverted to the days where we couldn’t dine out (though mercifully, we were still allowed to roam the city and shop in pairs). Then things got better, until it got worst again. And it got better once again, and with majority of the population vaccinated, companies started recalling their employees back to the office for mere weeks, until things blew up once again and very nearly overwhelmed our healthcare system. Back to two. And now five. And with Omicron just around the corner, it’s almost as if we’re stuck in an endless time loop. Rinse, repeat.

At least some of us who are daring enough can now venture out through the Vaccinated Travel Lanes. For now. 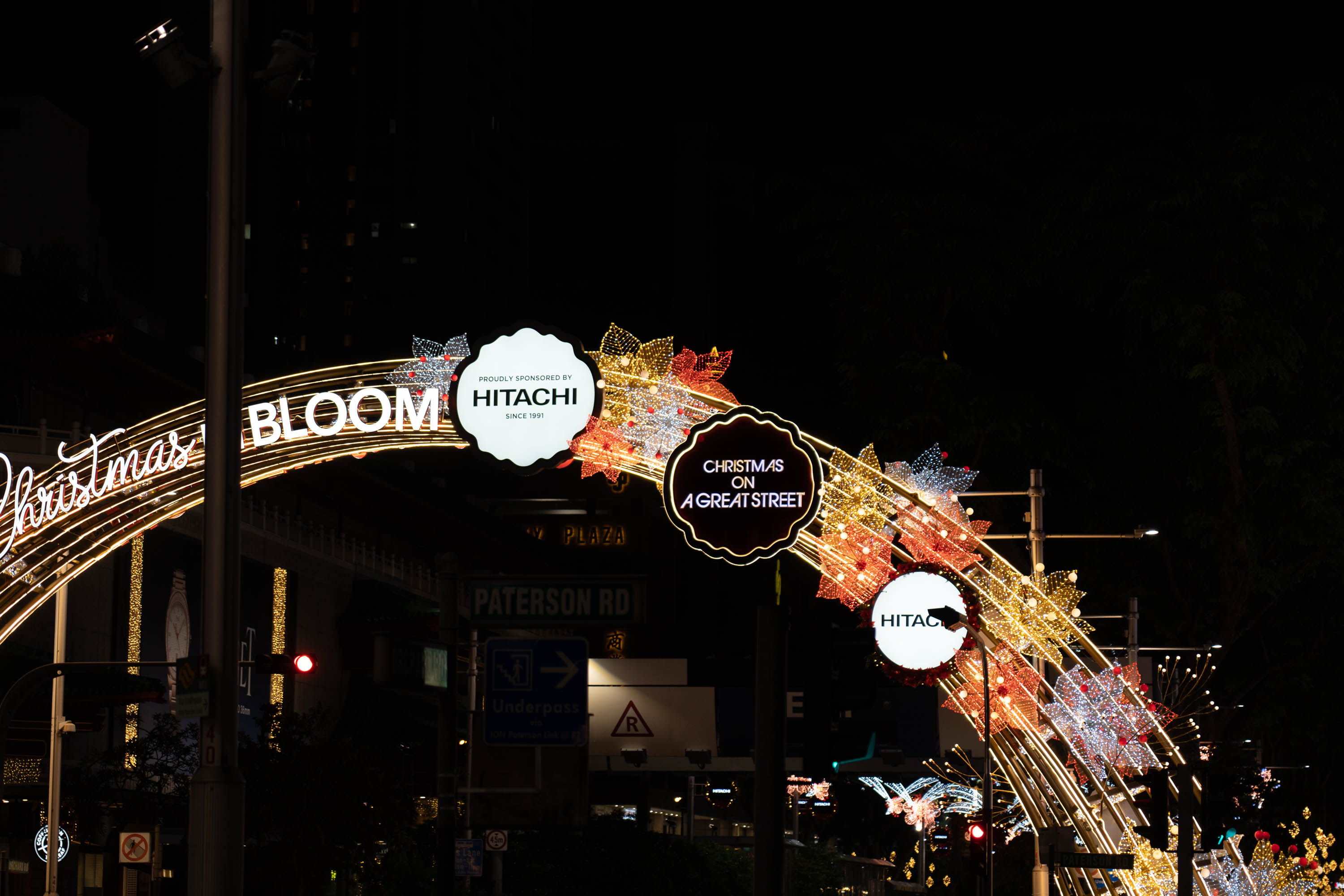 Christmas on a Great Street

For the rest of us, at least we can take solace in the fact that the annual Orchard Road Christmas light-up remains a constant. So is Hitachi, which has apparently sponsored this event since 1991. The theme this year is “Christmas in Bloom”, and as you’ll note, there are a variety of “flowers” on display along the way.

This year, I opted to begin my photo walk from Dhoby Ghaut instead of Orchard. A change of perspective, you could say.

The decorations start outside the Atrium@Orchard extension of Plaza Singapura, with the brief intermission outside the Istana where there are no decorations, before proceeding uninterrupted to the other end of Orchard Road.

I quite like the lighting along this stretch. The yellow gold theme brings back a sense of warmth which was missing from the past years. There are no hanging Santa butts this time round, although we do get the usual set of ornamental baubles.

Much like the design of car taillights these days, the arch is lit up in uninterrupted lines, instead of discrete LED lights that look “pixelated” when close up. Technology evolution, perhaps?

Plaza Singapura used to deck its trees with warm Christmas lights. They’re still there, but I think they reduced the number of LEDs wrapping around the trees, as they do not look as prominent as they used to. Or perhaps the colour of their Christmas lights have blended in too well with the main decorations.

Heading towards the Concorde Hotel stretch, things are more or less the same. I do really like the design of the flowers, especially those adorning the street lamps.

All the images I’ve shown so far are taken from the back. Viewed from the front, the decorations look similar, although curiously the Hitachi lamp is now white-on-black instead of black-on-white. 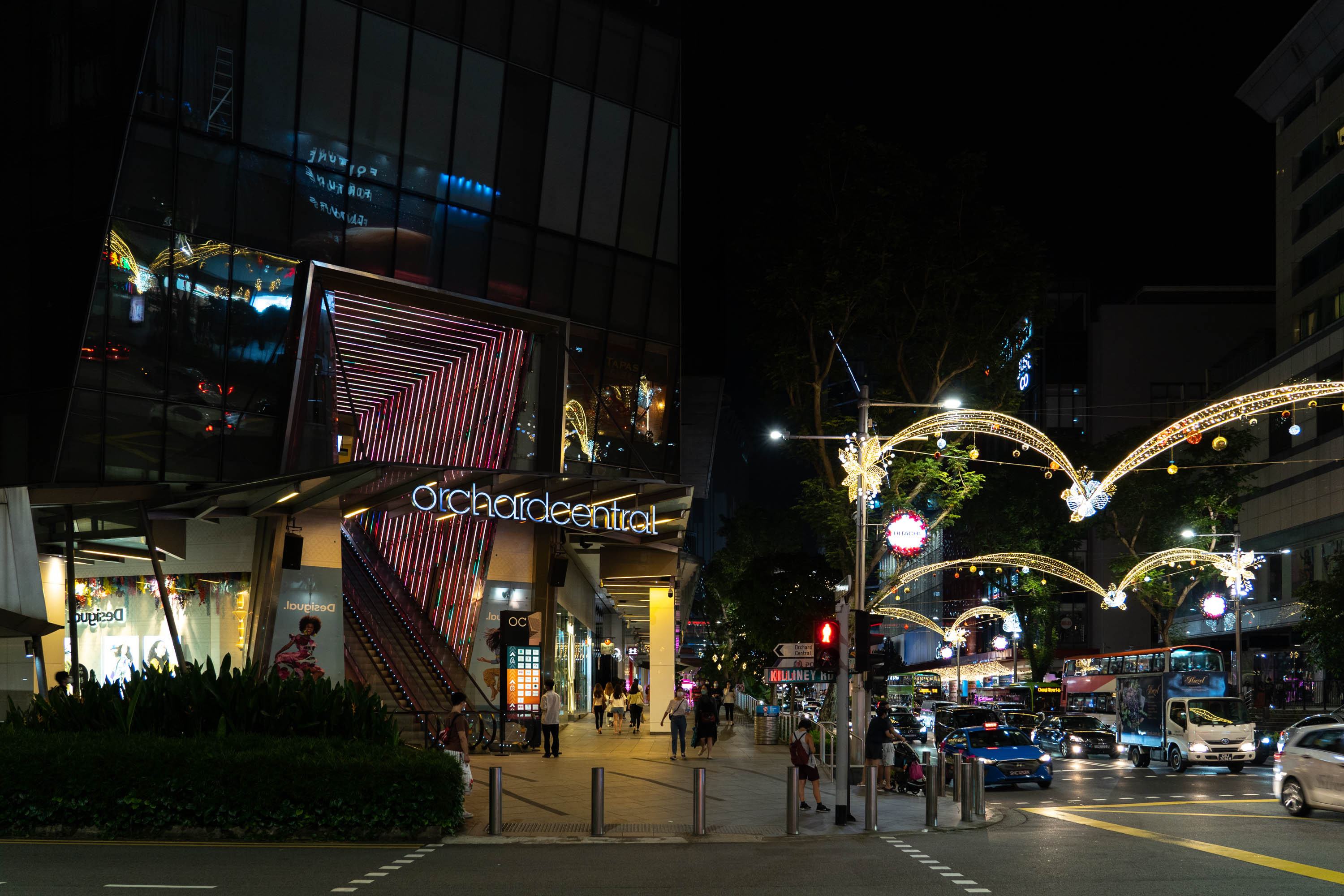 Moving along to Somerset, things are considerably dialed down this year. Orchard Gateway used to have these very elaborate, eye-catching designs, but all we have this year is an oversized Christmas gift box. Similarly, CentrePoint’s only Christmas decoration this year is in the form of rolls and rolls of LED lights.

Nothing much to see near Orchard Central, 313@somerset and Design Orchard, either.

As we move further upwards to the traffic junction of Orchard Road and Grange Road, things start to take a slight twist, with the introduction of a new flower variant and this, uh… jellyfish looking thing?

As it turns out, this marks a transition to bright bluish-white lights and rose gold flower petals, which will continue on until ION Orchard. And here you’ll also get to witness the rebirth of The Heeren in the form of Courts’ new flagship store.

So… what actually powers these lights? The answer is there if you look closely enough…

At the Mandarin Gallery, once again the Chanukkah centrepiece is in full display. To their credit, the decorations this year are far more palatable than the the gaudy displays in the previous years. Sometimes, less is more.

Outside the Apple store, the theme of the day is the iPhone 13. I’m curious as to why they did not show the iPhone 13 Pro instead. 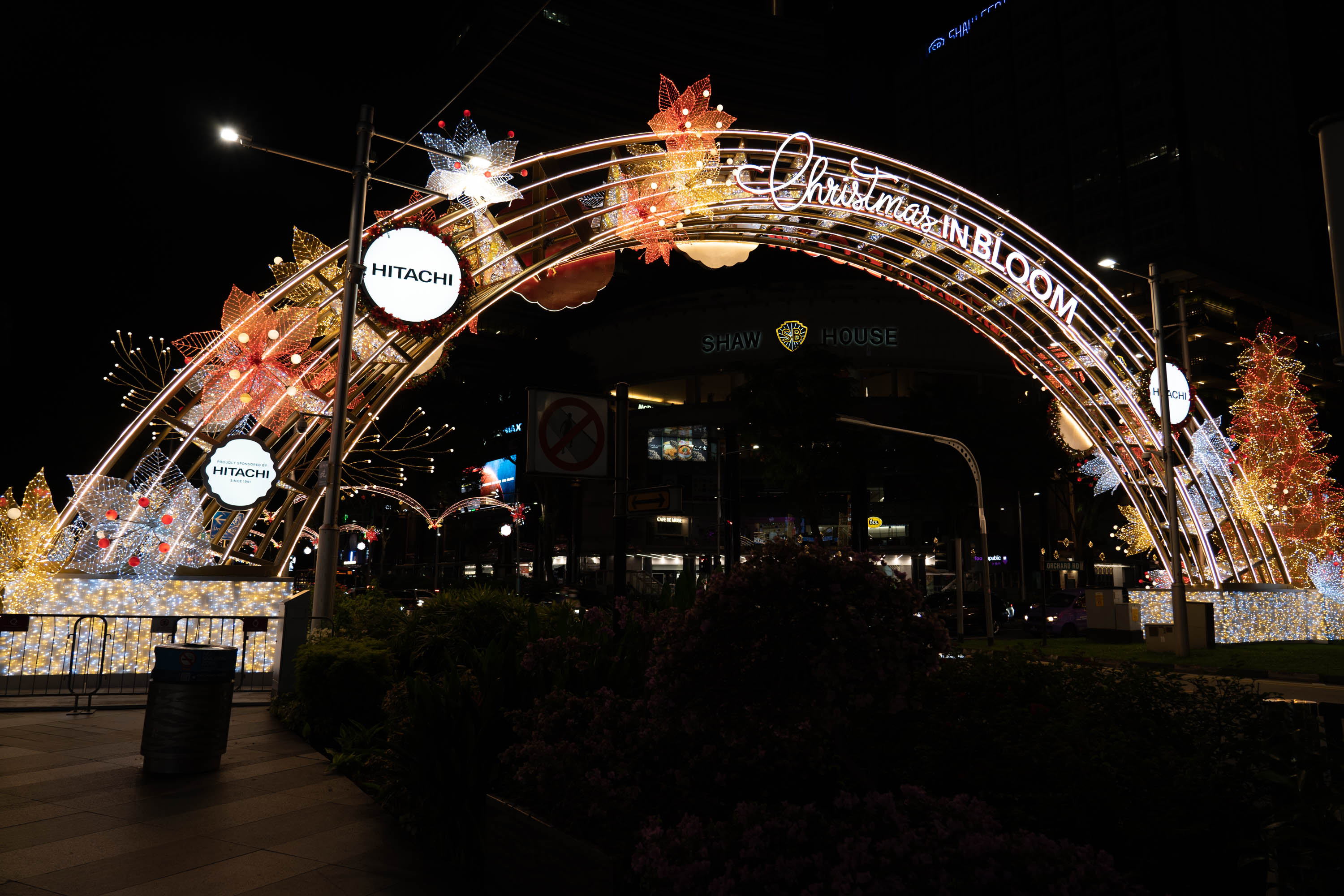 As with the prior year, the area outside Ngee Ann City remains pretty bare. There are no buskers around — due to regulatory restrictions — but in their place we have Tudor speakers blasting Christmas tunes. Also, it seems that night cycling in the city is the trending activity to do these days, and unfortunately, it appears many are not following safe distancing guidelines.

Surprisingly, there are still street buskers hawking LED balloons, though their numbers are fewer as compared to the past years.

Wisma has opted for a warm colour scheme this year, in contrast to previous years. And it appears that the ice cream sellers have to work till 10pm these days… What’s more interesting is an ad from Crypto.com. Looks like cryptocurrency is finally becoming more mainstream.

Tangs, on the other hand, has ‘sold its soul’. Instead of memorable Christian quotes, we now get iPhone and Piaget advertisements.

Once again, ION Orchard eschews the traditional Christmas tree. This year, the main sponsor is Chanel and it wants you to buy its No. 5 perfume. An added bonus — a slice of Tiffany’s.

Lastly, the oft-forgotten Paterson Road stretch which houses older or less popular shopping malls like Far East Shopping Centre, Pacific Plaza and Liat Towers. Here, the arch takes on a rose gold tint, which I feel looks the nicest of the bunch. They should’ve used this on the main stretch instead. The flower designs are also different.

Also… a shot of Wheelock Place, which, as usual, has used its entire conical glass facade as a Christmas tree in itself.

To close off, I must say that I really like the arch design this year. At a first glance, it may look rather simple — you get less of those hanging baubles or Santa butts… but it is only when you look more closely that you appreciate the intricacies of the varying flower designs and the colour of the LED lights used.